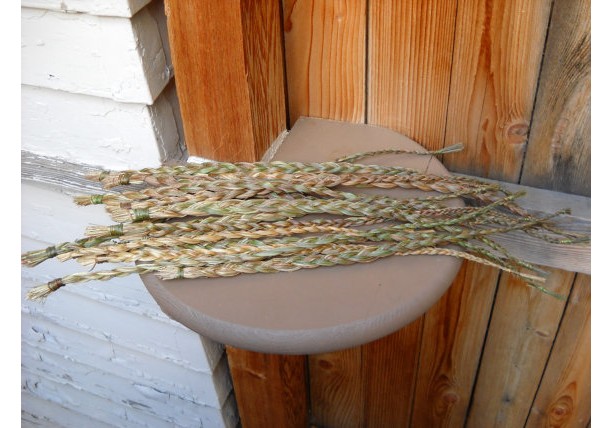 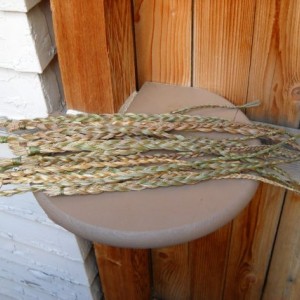 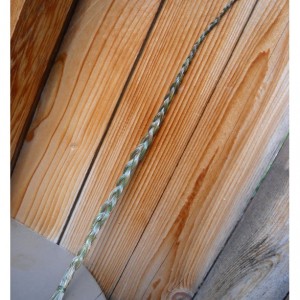 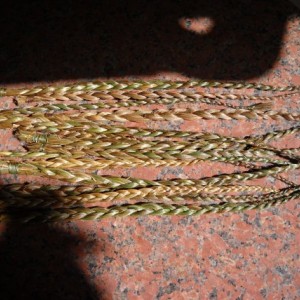 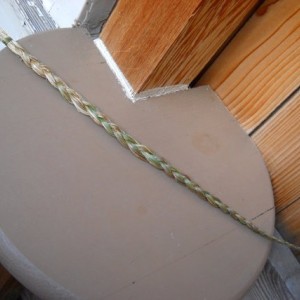 14 braids available for sale. The price below is "each." Hang in your car or in your home on your walls and enjoy the fragrant scent of sweetgrass. These organic braids were wildgrown in Kansas. They smell wonderfully! The lengths of these individual braids vary from 16" to 21". Wikipedia Hierochloe odorata or Anthoxanthum nitens,[1] also known as sweet grass, holy grass (UK), manna grass, Mary's grass, seneca grass, sweetgrass, or vanilla grass, is an aromatic herb native to northern Eurasia and North America. In Poland it is known as bison grass.[2] It is used in herbal medicine and in the production of distilled beverages (e.g., Żubrówka, Wisent). It owes its distinctive sweet scent to the presence of coumarin. Sweet grass was, and is, very widely used by North American indigenous peoples. As a sacred plant, it is used in peace and healing rituals. Leaves are dried and made into braids and burned as vanilla-scented incense; long leaves of sterile shoots are used by Native Americans in making baskets. •Natives of the Great Plains believe it was the first plant to cover Mother Earth. •The Anishinaabe, Cree, Mi'kmaq, and other Algonquian first nations of Canada believe it is a purifier, and burn sweetgrass before all ceremonies. It is a reminder to respect the earth and all things it provides. •It is also used in ceremonial items by the Blackfoot and Lakota peoples. Used as an Incense by at least the Blackfoot, Cheyenne, Dakota, Kiowa, Lakota, Menominee, Montana, Ojibwa, Omaha, Pawnee, Ponca, Sioux, and Winnebago peoples. Used for purification, as oblations to ancestors, for protection of spirits, and keeping out of evil and harm. Used in a variety of ceremonies including peace ceremonies and initiations. •Used by Blackfoot, Cheyenne, Kiowa, Lakota, Montana, Okanagan-Colville, Omaha, and Thompson for cosmetic and aromatic purposes. Blackfoot and Gros Ventreuse leaves soaked in water and used it as a hairwash. Sweet grass tea and smoke were used for coughs and sore throats (Flathead, Blackfoot). Teas used as a wash to treat chapping and windburn, and as an eyewash. Used as body & hair decoration/perfume by Blackfoot, Flathead, and Thompson. •The Blackfoot chewed grass as a means of extended endurance in ceremonies involving prolonged fasting. •Iroquois, Kiowa, Malecite, Menominee, and Mi'kmaq people (amongst others) use sweetgrass in basketry (including mats) and crafts. •Kiowa use fragrant leaves as stuffing for pillows and mattresses. •Used for sewing at least by Menominee. •Used as an incense to "keep the bugs away" by Flathead. •Used by Cheyenne to paint pipes in the Sun Dance and the Sacred Arrow ceremonies. Sweetgrass has a mellow, almost soporific effect, and for many is a useful aid to entering a meditative state. Coumarin, although not known to possess psychotropic effects, is common to a number of herbs used ritually which have strong anecdotal evidence for at least mild psychotropic properties. (http://en.wikipedia.org/wiki/Hierochloe_odorata) Many Native tribes in North America use sweetgrass in prayer, smudging or purifying ceremonies and consider it a sacred plant. It is usually braided, dried, and burned. Sweetgrass braids smolder and doesn't produce an open flame when burned. Just as the sweet scent of this natural grass is attractive and pleasing to people, so is it attractive to good spirits. Sweetgrass is often burned at the beginning of a prayer or ceremony to attract positive energies. (http://www.nativetech.org/)
$10.00 USD
This product is currently unavailable.