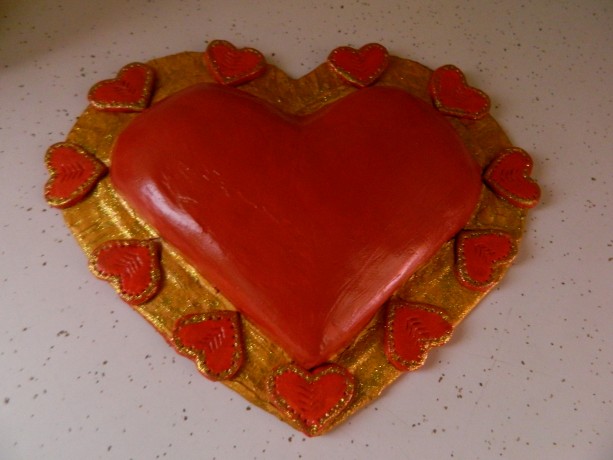 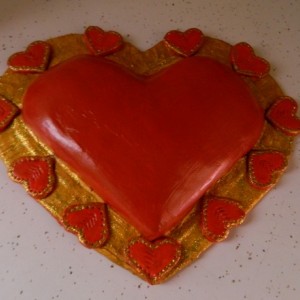 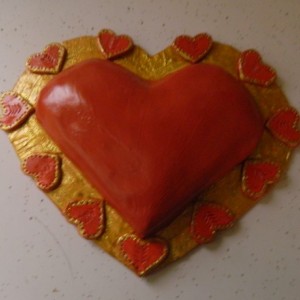 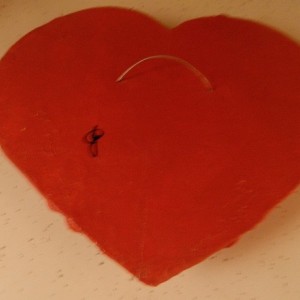 Original design, handmade, one-of-a-kind, wall hanging. This piece is made of Paper Mache, Acrylic Paint, Glitter and Gloss Finish and measures 10” high x 12” wide by 3” deep. This would make a perfect, Christmas, birthday or Valentine's Day gift for that special someone in your life. ORIGINS OF VALENTINE’S DAY: A PAGAN FESTIVAL IN FEBRUARY While some believe that Valentine’s Day is celebrated in the middle of February to commemorate the anniversary of Valentine’s death or burial–which probably occurred around A.D. 270–others claim that the Christian church may have decided to place St. Valentine’s feast day in the middle of February in an effort to “Christianize” the pagan celebration of Lupercalia. Celebrated at the ides of February, or February 15, Lupercalia was a fertility festival dedicated to Faunus, the Roman god of agriculture, as well as to the Roman founders Romulus and Remus. To begin the festival, members of the Luperci, an order of Roman priests, would gather at a sacred cave where the infants Romulus and Remus, the founders of Rome, were believed to have been cared for by a she-wolf or lupa. The priests would sacrifice a goat, for fertility, and a dog, for purification. They would then strip the goat’s hide into strips, dip them into the sacrificial blood and take to the streets, gently slapping both women and crop fields with the goat hide. Far from being fearful, Roman women welcomed the touch of the hides because it was believed to make them more fertile in the coming year. Later in the day, according to legend, all the young women in the city would place their names in a big urn. The city’s bachelors would each choose a name and become paired for the year with his chosen woman. These matches often ended in marriage. Thank you for looking ! FREE S/H
$25.00 USD
This product is currently unavailable.